The Most Popular Wedding Songs in the US

Music is an integral part of every wedding celebration. While the style of music played at weddings varies quite considerably around the world, sentimental songs and atmospheric orchestral pieces are always vitally important in setting the scene for a couple’s big day.

When most people think of wedding music, they’ll immediately start humming the opening of the famous Wedding March. First performed at the 1858 wedding of Queen Victoria’s daughter, Princess Victoria Adelaide Mary Louise, and Frederick William IV of Prussia, the composition is now one of the most famous pieces of wedding music in the world.

Pieces like the Wedding March have definitely stood the test of time, remaining hugely popular to this day. But over the years the music favoured by couples tying the knot has changed enormously.

We decided to find out which wedding songs are now the most popular. So, we started looking into how today’s couples are using music to celebrate on their wedding days.

Our team used data from Spotify to see which music couples are streaming for wedding celebrations. We found out which tunes are most likely to feature on those all-important wedding playlists, and how often the top choices are being blasted from the speakers of wedding venues all over the country.

The most popular wedding songs for today’s couples include everything from romantic ballads and orchestral masterpieces to crowd-pleasing dance floor anthems. Here are the top pieces of wedding music for celebrations in 2022. 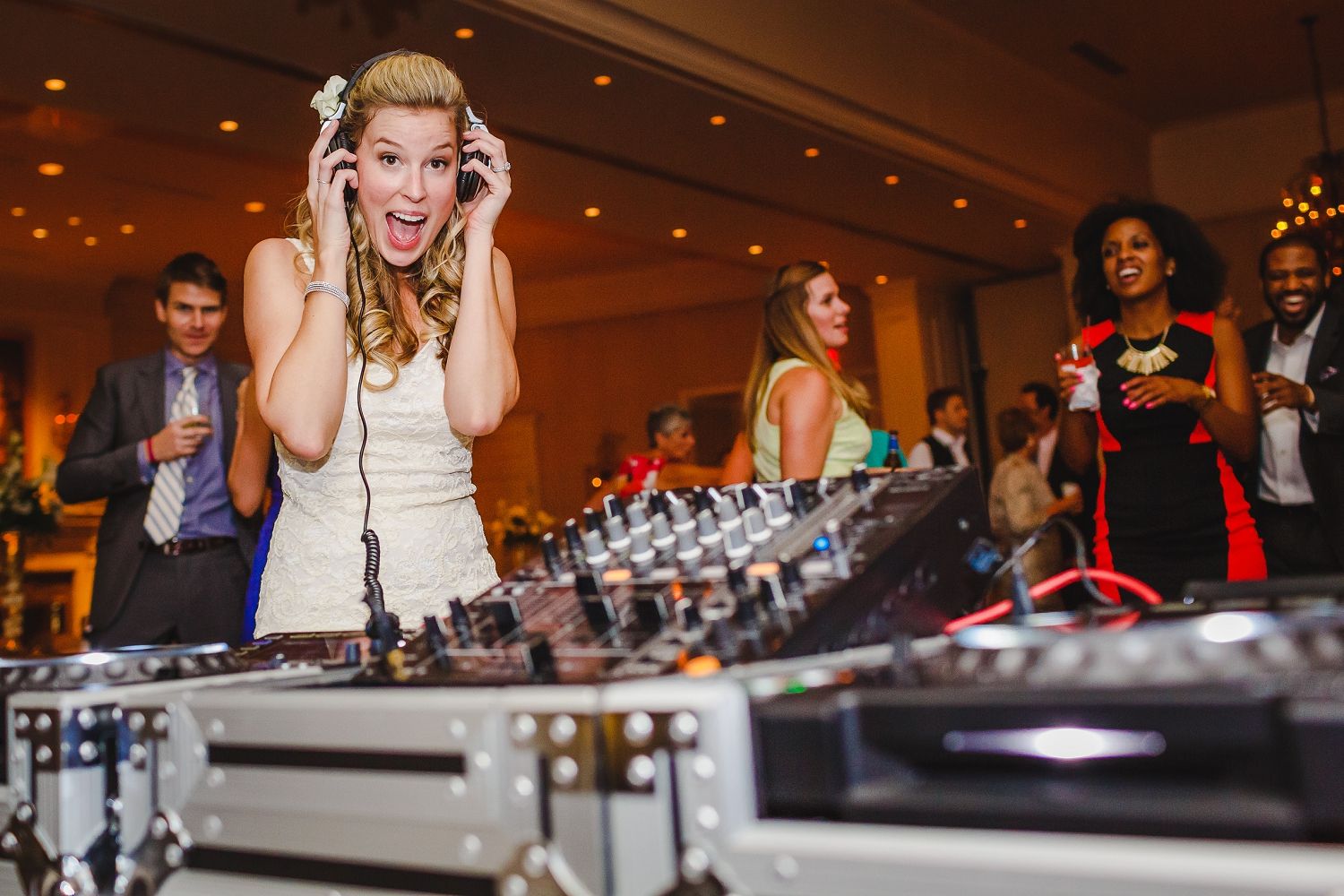 To find the overall most popular wedding songs we looked at 10,363 Spotify playlists and 856,586 total songs on those playlists.

According to our data, the most popular wedding song is I Wanna Dance with Somebody (Who Loves Me) by Whitney Houston appeared in the analysed playlists 2,509 times, which was more than any other song. This was followed by Can't Help Falling in Love by Haley Reinhart, Marry You by Bruno Mars, Dancing Queen by ABBA and My Girl by The Temptations.

Bruno Mars featured three times in the top 20, followed by Ed Sheeran and Beyoncè who both appeared twice respectively.

The top 20 most popular wedding songs based on spotify playlists are: 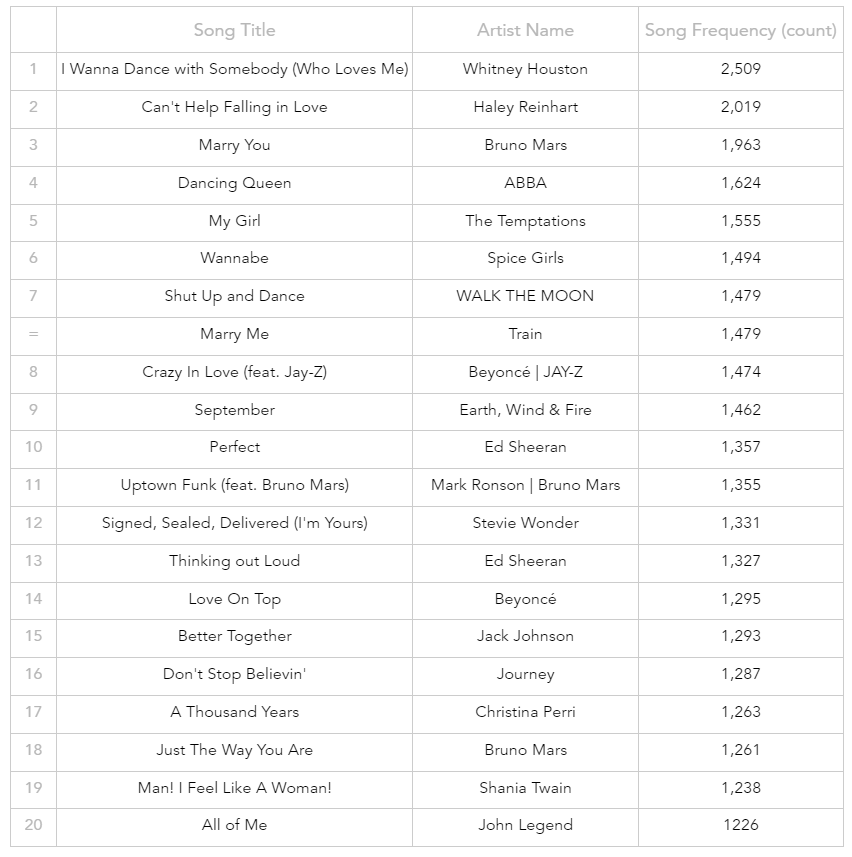 Wedding song trends over the years

We decided to have a closer look at the data to see what trends we could find when it comes to wedding music over the years. Unsurprisingly after its TikTok popularity, Lizzo’s ‘About Damn Time’ is the only new song to be in the top 50 for 2022 at 29 overall and 14 for Wedding Prep.

We believe that songs from the 90’s increasing in popularity in recent years is down to the demographic of people that will likely be getting married in recent years. The average age to get married in the US is 28 for women and 30 for men, which means that they will have been born in the 90s, potentially explaining this rise for certain songs.

Some songs ranked high for specific moments during the wedding, but not in the overall top 100. Ruelle’s ‘I get to love you’ is in position eight for ceremony music and 11 for first dances but it doesn’t make the top tier list. ‘You are the reason’ by Calum Scott also placed in position four for a first dance in 2022 but not in the top 100 overall. The wedding classic, ‘Mr. Brightside’, was in position 80 in 2019, 36 in 2020, 12 in 2021 and five in 2022 for reception songs. 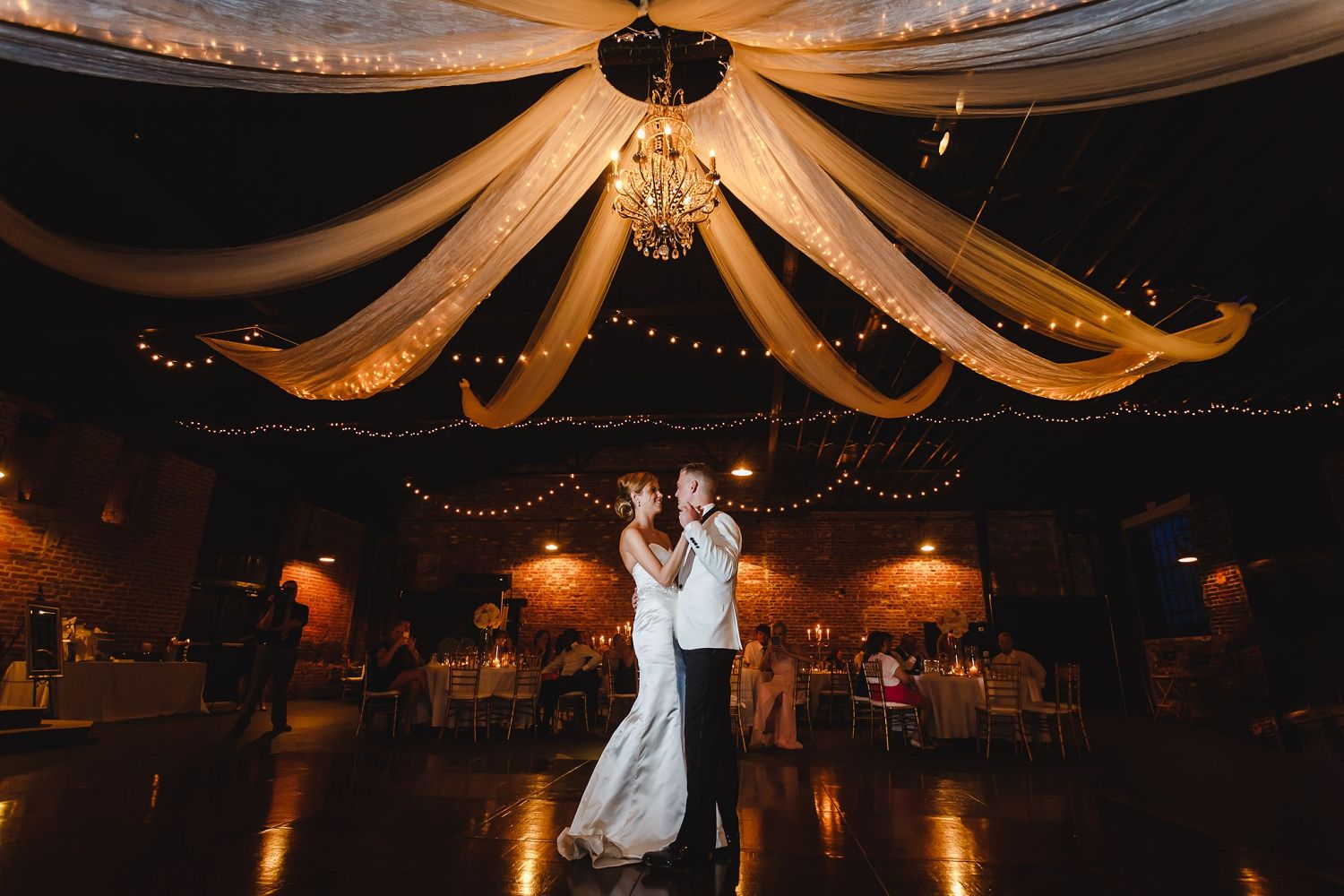 Most popular songs for a wedding day

Getting ready is almost as big a part of the wedding day as the ceremony itself, so the first part of our research looked at playlists to have on whilst everyone is putting on their finest attire for the big day. The top choices included Whitney Houston’s classic ‘I Wanna Dance with Somebody (Who Loves Me)’, and the ever-popular ‘Marry You’ by Bruno Mars. Whitney’s anthem featured on wedding playlists 1,830 times, while Bruno Mars’ Marry You was a close runner-up, at 1,569 times.

The wedding ceremony itself is of course the most important part of the day, so couples are always discerning about their music choices here. Our analysis revealed the most popular wedding songs for the ceremony, according to Spotify streaming data. The most popular song for ceremonies was Haley Reinhart’s version of ‘Can't Help Falling in Love’. Featuring on wedding ceremony playlists 250 times, this was the must-have piece of music for weddings in recent years. This was followed by ‘A Thousand Years’ by Christina Perri (190 playlists) and ‘Better Together’ by Jack Johnson (141 playlists).

The first dance is a historic tradition, dating back to the era when hosts would take to the dance floor to open a ball, before inviting their guests to join them. Today, the vast majority of couples choose to include a first dance at their reception, picking one of their all-time favourite songs to kick off the celebrations. The data from Spotify revealed the songs that are most commonly chosen for the first dance, revealing that the most popular choices here are quite similar to those for the ceremony itself, with Haley Reinhart’s version of ‘Can't Help Falling in Love’ topping the charts once again. Similarly to the ceremony, this was followed by ‘Better Together’ by Jack Johnson (135 playlists), ‘Perfect’ by Ed Sheeran (124 playlists) and ‘Stand by Me’ by Ben E. King (123 playlists).

The reception is a couple’s chance to really celebrate their big day, in the arms of their closest friends and family members. And as the newlyweds start to let their hair down with their guests, those big hits get everyone's feet moving on the dance floor.

Some huge hits appeared in the top choices for wedding receptions, including award-winning pieces from decades gone by and more recent anthems that guests can never resist singing along to. Whitney Houston’s ‘I Wanna Dance with Somebody (Who Loves Me)’ was the all-time favourite wedding reception song, featuring 623 times. Other popular songs for the wedding party included ABBA’s ‘Dancing Queen’, which featured 477 times, and Usher’s ‘Yeah! (feat. Lil Jon & Ludacris)’, which appeared 457 times.

The top two choices for wedding receptions for 2022 are the same as the two all time favourites, but this year third place went to ‘September’ by Earth, Wind & Fire. The karaoke classic ‘Mr. Brightside’ by The Killers appeared in fifth place, closely followed by ‘Shut Up and Dance’ by Walk the Moon.

Music has long been used as part of wedding ceremonies and reception celebrations, but over time performances have evolved in line with changing fashions. However, some wedding music, like the ever-popular Wedding March, have remained a constant at Western weddings for many years.

Our research revealed the songs that today’s couples would never be without, from the sentimental songs that seem to sum-up couples’ feelings, to the celebratory hits that create the ultimate party atmosphere.